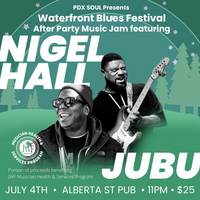 Tickets are still available at the DOOR (DAY OF SHOW)

Nigel Hall http://www.nigelhallofficial.com/ GRAMMY-winning Soul provider Nigel Hall is an artist who needs no introduction. Throughout his career, he’s built a mighty foundation of funk, onstage and in the studio, proving himself to be a true student of the music. His unique sound, built upon pages torn out of the golden-ages of R&B, funk and soul, have made him the musician he is today; an accomplished vocalist, keyboardist, studio musician, and member of the GRAMMY-nominated funk-jazz-soul-hip-hop-psychedelic-jam-experimental titans Lettuce.

Jubu Smith http://www.jubusmith.com Smith spent a decade with R&B group, Tony, Toni, Tone before going on the road for a year and a half with Whitney Houston. For the past 15 years, he’s been touring internationally eight months per year, primarily on weekends, with Maze, featuring Frankie Beverly. Those credits don’t include countless recording sessions with the likes of Luther Vandross, Mary J. Blige, Boyz II Men, Toni Braxton, George Duke and George Benson.

Only 110 tickets available. This is truly a special event!