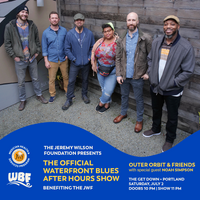 Outer Orbit brings original burning soul and pocket heavy funk while drawing on a range of influences from Sly Stone and The Meters to Aretha Franklin and Emily King.

In the short time Noah Simpson has lived in Portland, he has established himself as one of the top trumpet players in the area. He attended Portland State University under the Brad Merserau scholarship while studying with George Colligan and Darrell Grant. As a recent college graduate, Noah is a fixture of the Portland Jazz community sharing his passion for Black American music throughout the west coast.

Noah has performed with renowned musicians such as Bernard Purdie, Lewis Nash, Alex Acuna, Jaleel Shaw, Sean Jones, and Dennis Rowland. In addition he has also toured around the country with groups such as Ron Artis II, Climbing Poetree, and Taina Asili.